What Is The Veteran Population In Florida? 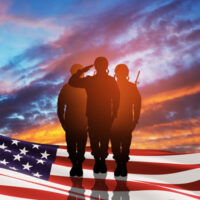 According to the United States Census Bureau, there were just 18 million veterans in the adult population throughout the United States in 2018. This represents a steep decline from over 26 million during the time period of 2000 through 2018. The number of veterans that resided in the country in 2018 made up 7% of the total population of adults.

The age of veterans in 2018 that were counted ranged from 18 to 100 years old. These veterans made up a population that served in the Korean War, Vietnam War, and all the way through to the Iraq War. Veterans who have put on the uniform with honor and bravely fought deserve the utmost respect when they come back home. As such, they should be well taken care of. When thinking about the future, it is possible that a veteran could be entitled to various benefits from the Veterans Affairs Administration. One could be a monthly allowance known as Aid and Attendance.

If you are a veteran in Florida and would like to know if you are eligible for Aid and Attendance and want to see how that can be included in your estate plan, then The Villages, Florida Aid and Attendance attorneys at Millhorn Elder Law Planning Group are here for you and can evaluate your situation. Should you qualify, your attorney at Millhorn Elder Law Planning Group can help you reduce the time it takes to be successful and obtain the benefit you both need and deserve.

What is the Veteran Population in the State of Florida?

The National Center for Veterans Analysis and Statistics shows the following for veterans residing in Florida in 2020:

The total population of Florida in 2020 as reported by the United States Census was 21.5 million people making it the third most populous state in the nation. Miami-Dade County had the most residents with Liberty County home to the fewest number of residents. That same year, the state of Florida came in as the second most populated state with veterans across the entire country.

Call Today to Speak with an Aid and Attendance Attorney in The Villages, Florida

There are a significant number of wartime veterans living in Florida. Many may be able to qualify for Aid and Attendance. Surviving spouses of wartime veterans can also apply and receive the benefit. Having this extra monthly income can go a long way towards helping veterans who need assisted living or support with daily activities pay for such services.

To learn more and have your specific situation reviewed, The Villages estate planning attorneys at Millhorn Elder Law Planning Group are here for you and ready to help. Call today at 800-743-9732.